The Euro-Africa Championships for 2019 will be held at Great Belt in Denmark. Unlike recent competitions held by CMAS, this will be a shore diving completion only. All athletes need to either start and end at the same spot (zone 1) or start in at one spot and either return to the same spot or re-enter at a second designated spot. The net result of this will be that the costs incurred by the athletes will be less (and the zones smaller so easier to scout).

Bearing this in mind, it was decided to try to simulate the conditions as best as possible – cold (15 degree) water and shore dives. Pointless hosting a trial in 30m of water where the max depth in Denmark is 20m 2km out from the one starting point – normally <15m. The area chosen for the trial was originally the western side of False Bay, but concerns around safety necessitated a change to the area between Gordon’s Bay and Hermanus – a predominantly rocky coastline with a lot of kelp offering protection. The actual dive points were not communicated to prevent prior scouting – a few individuals tried to guess areas.

The invitees were taken from the top 10 divers for the last two Nationals plus a wild card entry from the winner of the major open competitions (Border Open 2018 and Hugenote Open 2019). The following divers indicated that they would attend – considering the cost for participation of around R50k to be borne by the athletes.

Although I qualified, I did not participate (I did dive though to experience the conditions) as this would not have been fair – to organize, know the areas and compete.

The trials were held on the weekend of 27 and 28 April – the team needs to be forwarded to the Danish organizing committee by 1 May.

Unfortunately on the given weekend, conditions turned out to be tougher than initially planned. A strong south easterly wind blew on Friday evening and the swell jacked up from zero to 2.5 – 3m over-night.

All the athletes met at the Hangklip Slip parking lot. The wind was still blowing a strong south easterly – conditions at Hangkilp were not dive-able (zero viz in the eastern bay and big waves on the western side. After looking at a few spots, it was decided to dive Container Bay, where there was viz, but a very strong wave breaking on the point. 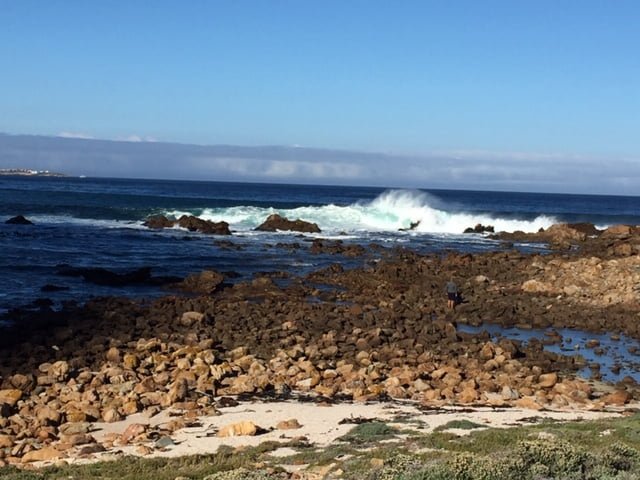 Divers entered the water to the left of the break, through a gully, and if timed right, no issues experienced. 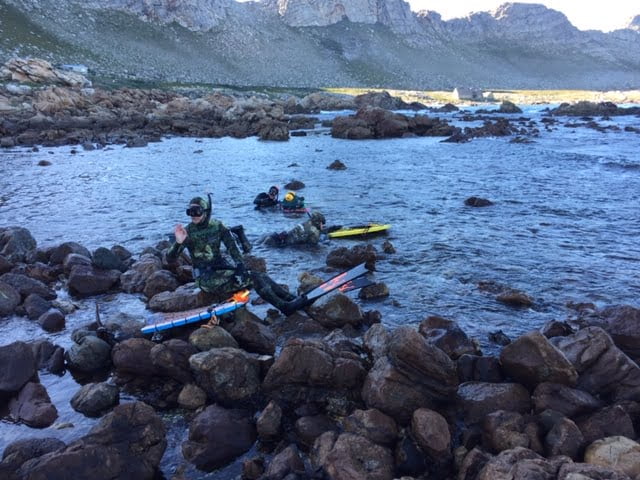 Marriette, Robert and Derreck about to ‘launch’….

All the divers swam to the east. Four hours later the first divers returned. Catches were non-existent – proof of the tough conditions – fish were shot, but all were below the sizes set. I also swam out and can attest that there was an extremely powerful ground swell and the water temperature around 13 degrees. On the opposite side of the bay, the water was warmer, but viz was only 1 meter, there were fish, however. No-one dived there though.

The first size fish were brought in by Guy and Niel – the former with a good Hottie and a Butterfish, Niel had two Butters, a really good John Brown, Galjoen and a good Blacktail.

The last two divers to return were Jose and Fred. Both had fish – Jose two Butterfish, and Fred a big Hottie and a Butterfish.

The fact that these fish were taken is a testament to the abilities of the divers – fish were few and far between (some athletes reported no seeing a single shoot able fish).

Special mention must go to Marriette de Jager – the only female competitor (Euros will have a ladies comp too). She dived in conditions most would not even consider diving in – brought in two hotties (which unfortunately did not weigh). Then after hitting the shore – turned around, and swam back out to assist another athlete who was suffering from cramp. An epic gesture!

At the end of the day, the placings were as follows

Day two was planned for Onrus. On arriving at the spot, quire a heavy fog was evident. Due to limited time, the decision was taken to dive the bay. As per the previous day, waves could be heard breaking off the point, but it didn’t sound too bad. Everyone entered the water at the sheltered slip 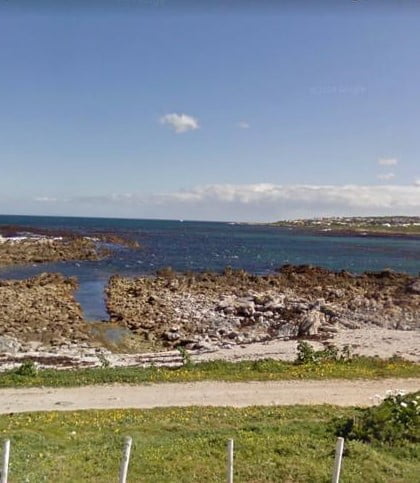 This is what the bay should have looked like. Calm, protected, easy entry via the ‘slip’.

However, this is what greeted us: 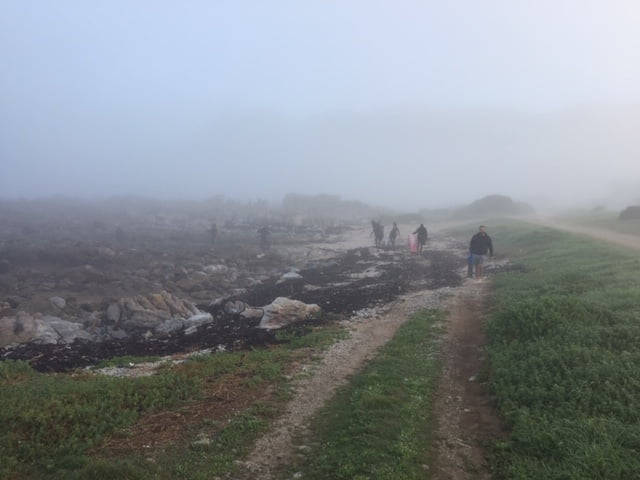 Heavy fog – all the athletes entering the water via the slip.

Suffice it to say, the water was frigid – 11 degrees with at most 1m viz. I entered after all the athletes, swam into the bay as I wanted to see the resident cow sharks. With 1m viz, this was pointless. I then swam out of the bay hoping to find better viz – remained <1m with extremely powerful groundswell. At a point the fog was so thick that you couldn’t see 10m ahead of you. You could hear the waves breaking on the shore, but had no idea where the rocks were. In the fog at a stage I started to hear whistles, calls, car hooters etc., it was, however, impossible to just swim to shore – thick mats of kelp meant that only when swells passed over the bed, you could swim a few meters, then stop as the mat floated up from below. On reaching land all the athletes were on the beach. Robert had lost his boogie board with his gun attached (later found) to it as he and Marriette come in over the rocks – Marriette unfortunately lost her mask at the same time. By this time it was already 10:30.

It was a surreal experience not knowing where you are in the thick fog – something us Natal based divers have never experienced.

It was decided to go through to Hermanus – in particular the area to the west of the abalone farms. The water appeared to be much cleaner, but the same strong swell was running. A vote was taken not to dive as conditions appeared to be tricky – a single entry/exit point behind a big rock. Timing would have been everything.

Given the above the team for Euros will be as per the positions of Day 1. 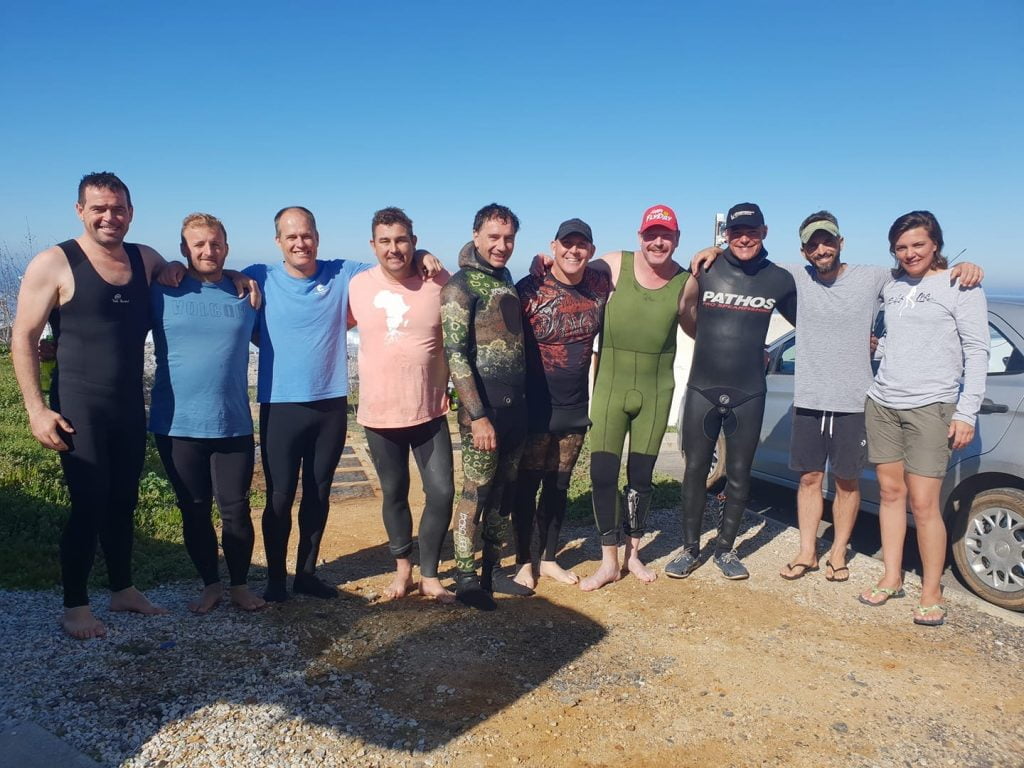 Special thanks must go out to Adriaan Kriel who, after being denied leave and having to withdraw from the trials , selflessly volunteered to assist with dive zones and input into running the trials.